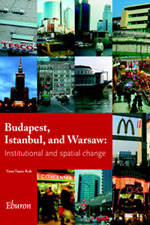 It shows how local contingencies such as traditions, values, and power structures have steered social, economic, and political deregulation in a direction peculiar to each city. Budapest, Istanbul, and Warsaw were selected as case studies because they represent distinct responses to economic globalization under opportunity-driven market conditions. In each case, the analysis covers three major institutional transformations: the shift from municipal government to governance systems; the flexibility of urban planning; and the deregulation of finance systems in relation to their impact on the property market. Some conclusions are drawn on how cities change under the influence of economic globalization and how new spatial patterns reflect opportunity-driven market conditions.

Tuna Tasan-Kok completed her Masters in Regional Planning at Middle East Technical University in Ankara – Turkey in 1996, after which she worked some years as research fellow at several research institutes in East-Central Europe. Tasan-Kok started working on her PhD at the Urban Research centre Utrecht (URU) of the Faculty of Geosciences – Utrecht University in 2001. She currently lives and works in Antwerp, Belgium.

“The author has produced a well-elaborated comparative study of the three cities. She characterises similarities and differences existing among Budapest, Istanbul and Warsaw. This is an interesting book and a good start for a talented young scholar.”
– Gyorgy Enyedi in: Urban Studies, Vol. 42, September 2005.

“Tasan-Kok should continue observing development in Budapest, Istanbul and Warsaw and report on the resulting spatial dimensions and character. While we continue to observe anecdotal examples of our globalized society, these city “laboratories” that she has so carefully described in her poignant book appear to demonstrate the future spatial pattern of globalizing communities.”
– James A. Kushner in: Journal of Housing and the Built Environment, Vol.20, Issue 2, 2005.