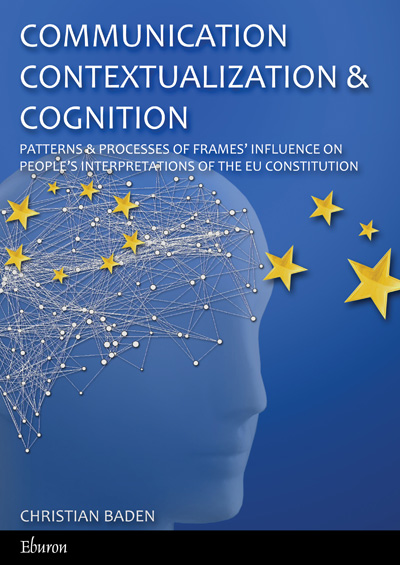 Framing affects what meaning a specific piece of information can assume. As a consequence, frames influence people’s interpretations in at least three interrelated ways. This study makes four main contributions to the academic debate on frames and framing. First, it integrates, further specifies, and extends existing theoretical approaches to framing within a network conceptualization of meaning. This conceptualization is compatible with linguistic theories of semantics as well as psychological theories of memory, and allows a much more encompassing view upon frames within social discourse and imagination. Second, it tests several theoretical propositions regarding the cognitive mechanisms underlying the processing of frame embedded information, supporting the view that frames mostly affect the semantic information brought to attention.

The three ways frames influence peopl’s interpretations: First, frames selectively direct attention toward specific knowledge already available to a person. Second, famously, frames affect people’s evaluations of issues by rendering different aspects more or less salient. Third, frames influence what further information coheres with a train of thought pursued, thereby directing the integration of information into people’s complex understandings of the world they live in. This study focuses on the understudied first and last of the above aspects. It develops and tests a theory of cognitive frame processing and aims to shed light on the role of frames in the formation of coherent, integrated social knowledge from discrete information.

Focusing on the interpretations of the European Constitution, third, this study compares the range of frames proliferated in Dutch public discourse with those formed by voters during the referendum campaign in the Netherlands. It finds that frames undergo a substantial degree of transformation during the acquisition of knowledge, reflecting people’s selective use and re-interpretation of the available information. Finally, the study advances a novel methodology based on semantic network analysis that allows studying the embedding of frames within wider accounts discourse.

Christian Baden studied political science, communication and European economics at Leipzig University and the London School of Economics & Political Science (LSE) before joining the Amsterdam School of Communication Research at the University of Amsterdam. This volume is his doctoral dissertation, which he collated under the supervision of Claes de Vreese. At present, he is a research associate at Ludwig Maximilians University in Munich.