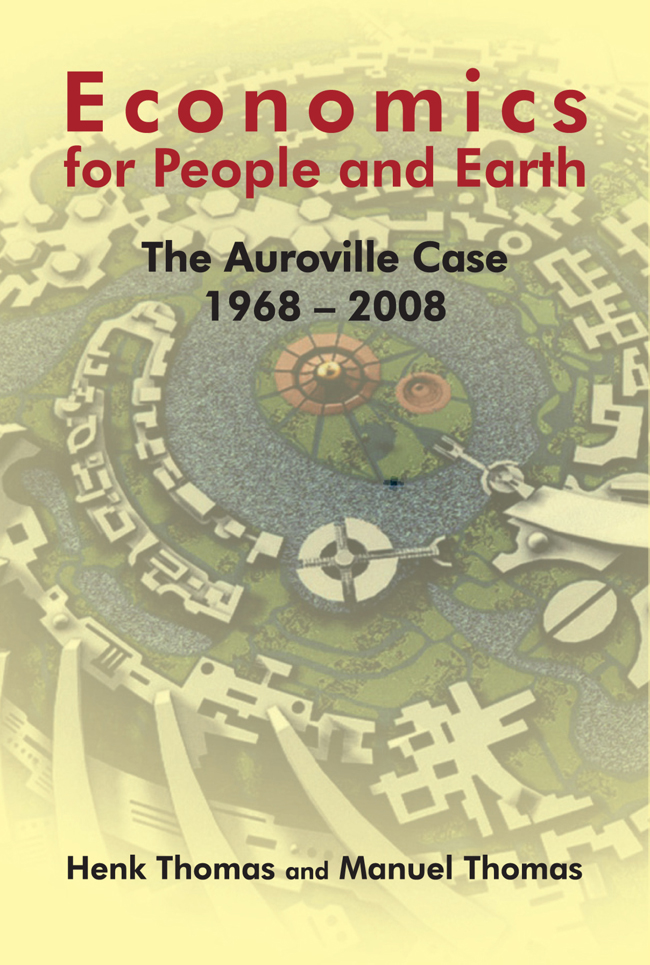 This book is the result of 15 years of research on Auroville’s economy. It outlines the principles envisaged by its founders, traces its history over the past four decades, investigates the growth of employment opportunities, offers a window on its economic activities through case interviews, and analyses the performance of its commercial and services domains.

Read the article ‘The Eco Friendly Township’ on www.businessworld.in

Another great review on www.thehindu.com

Auroville, an international township in South India, was founded in 1968. A small group of pioneers on a heavily eroded plateau, close to the Bay of Bengal near Pondicherry, set out to reforest the barren land and create a new socio-economic, ecological and spiritual habitat with a vision to build “a city the Earth needs”.

For years later, a vibrant community of almost 2,000 people from 43 nations had emerged, providing employment to some 4,000 men and women from nearby villages. Meanwhile, they had reforested thousands of acres of land, built homes, health centres and schools, developed organic farms, experimented with renewable energy and cost-effective building technologies, reached out to the neighbouring villages, and set up a plethora of businesses and services.

This book is the result of 15 years of research on Auroville’s economy. It outlines the principles envisaged by its founders, traces its history over the past four decades, investigates the growth of employment opportunities, offers a window on its economic activities through case interviews, and analyses the performance of its commercial and services domains.

It also gauges Aurovilles sustainability as a model of durable socio-economic development for people and Earth, and as an antidote for the all-pervading impact of global capitalism.

Henk Thomas, a citizen of The Netherlands, did his Ph.D. at Cornell University (Ithaca, NY, USA) in the Department of Economics. Before his retirement, he was for many years professor of Employment and Labour Studies at the International Institute of Social Studies (ISS), The Hague, teaching and researching development issues. He has published on participatory economics and small enterprise development. His work on the successful cooperative movement in the north of Spain, “Mondragon – An Economic Analysis”, (translated in Japanese, Spanish and Italian) is still an authentic source for understanding its origins, democratic institutions, and structural changes.

Manuel Thomas, born in Kerala, India, is a practising Chartered Accountant as Partner in a Chennai-based CA firm, and specialises in formulating and implementing strategies for companies entering India. He also does Audit, Income Tax and FEMA practice, including representations before the Appellate Authorities of the Govt. of India. His involvement in Auroville began in 1998 when he was invited to join the research team, primarily to decipher about 3800 balance sheets in order to create an extensive database for this study. Since then, he has worked with Auroville Groups and Units in various consultative capacities.