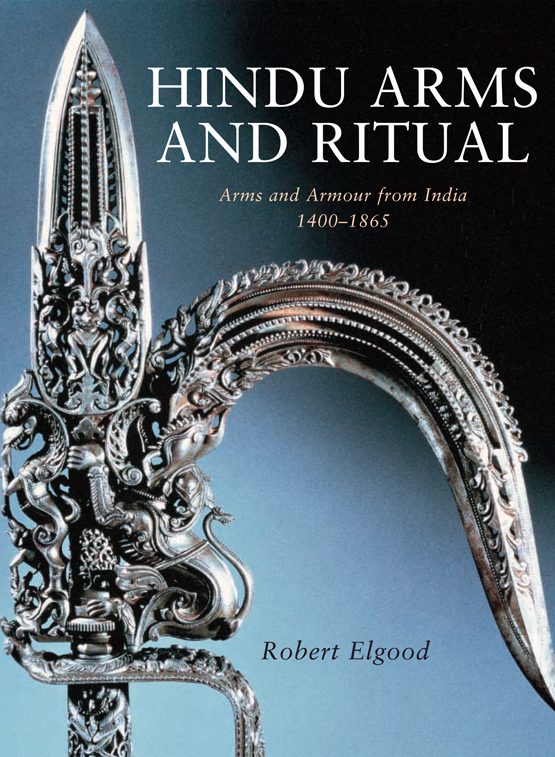 Most studies of Indian armor have concentrated on Mughal arms from northern India, and there has been no serious study of Hindu arms since the nineteenth century. Robert Elgood seeks to fill this scholarly gap with Hindu Arms and Ritual, a new and richly illustrated study that examines pieces from the Tanjore Palace Armory in south India.

This book is also available from University of Chicago Press

Most studies of Indian armor have concentrated on Mughal arms from northern India, and there has been no serious study of Hindu arms since the nineteenth century. Robert Elgood seeks to fill this scholarly gap with Hindu Arms and Ritual, a new and richly illustrated study that examines pieces from the Tanjore Palace Armory in south India.

Tanjore arms reveal a wealth of information about Hindu warrior society through the intricate and symbolic iconography carved on them. As Elgood shows, inscribed gods, goddesses, and sacred animals and plants infused the weaponry with divine powers of assistance. Drawing on evidence from various sources, such as ancient manuscripts and contemporary art, Elgood also challenges the commonly held opinion that most south Indian arms date from the eighteenth and nineteenth centuries. Instead, he argues, many pieces were made during the sixteenth and seventeenth centuries and are attributable to the Vijayanagara and Nayaka courts. This beautifully illustrated work is an invaluable contribution to the historical study of Indian arms and material culture.

‘This is a book not just for arms and armour specialists but for historians, art historians and anthropologists as well. A highly impressive and comprehensively illustrated work’.
Professor James Allan, Ashmolean Museum, Oxford.

‘This book is of exceptional importance to the study of Indian Arms and Armour. It classifies for the first time material dating from before 1600; dating and typology are fully supported by evidence from sculpture and other contemporary sources. Based upon objects from old Indian collections and major international museums, it is a fully researched, pioneering study of a hitherto misunderstood and neglected field’.
Anthony North, Victoria and Albert Museum.

Robert Elgood has a degree in Islamic History from SOAS and an Anthropology doctorate from Oxford University.

You can follow his recent work on Asian history on www.robertelgood.co.uk