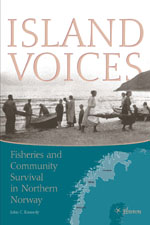 Island Voices introduces us to the people and four small communities of Arnøya, an island off northern Norway. John C. Kennedy explores the islands’ changing economic, political, and cultural relationship with extraneous forces.

Like their counterparts in the underdeveloped world, rural peoples living on the periphery of developed nation-states are vulnerable to forces that are increasingly beyond their control. Loggers, farmers, miners, fishers, and others cope with periodic resource scarcities, fluctuating global markets, government policies, and neo-liberal trade pacts. Although such developments are not new, globalization increases their speed and consequence, creating new opportunities and challenges for rural futures.

As a theoretically informed, ethnographically grounded, and illustrated case study, Island Voices introduces us to the people and four small communities of Arnøya, an island off northern Norway. John C. Kennedy explores the islands’ changing economic, political, and cultural relationship with extraneous forces. In narratives Kennedy collected, islanders discuss their history, the transition to the present industrialized fishery, diverse implications of a recent fishery crisis, migrations to and from their island, transportation policies, and their hopes and concerns for the future. We learn why change, both local and global, has unevenly benefited each of the island’s four villages. The book relates to similar struggles of rural survival elsewhere.

Dr. John C. Kennedy is the author of Holding the Line: Ethnic Boundaries in a Northern Labrador Community (1982); People of the Bays and Headlands: Anthropological History and the Fate of Communities in the Unknown Labrador (1995); and Labrador Village (1996), as well as numerous articles, chapters, and reports on Labrador. Kennedy taught anthropology at Memorial University between 1973 and his retirement as Professor in 2004.