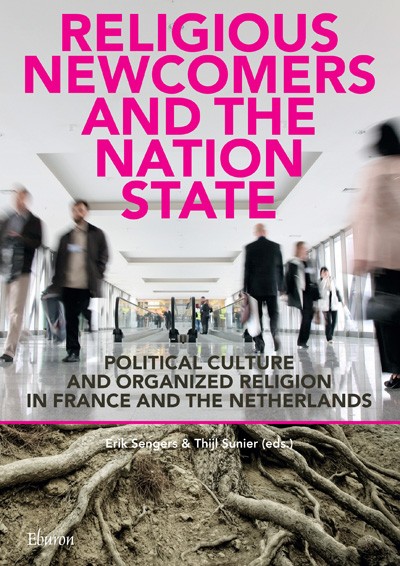 Religious newcomers and the nation statePolitical culture and organized religion in France and the Netherlands Erik Sengers & Thijl Sunier (eds.)

The question ‘how to integrate Islam in the political and social frameworks of European societies’ is a prominent one. To address this issue properly, it is necessary to step back from the heated discussions about this theme and to put it in a wider framework of nation building. This volume attempts to do this by making historical and comparative analyses on the integration of religious minorities in The Netherlands and France. It does not only focus on Muslims but includes seemingly integrated religious minorities such as Protestants and Catholics into the analytical framework.

The first part of the book deals with the historical roots of the relation between nation building and religion and the origins of the contrasting political cultures of the two countries. How did each of the two countries maintain national and political unity vis-à-vis real and imagined religious diversity? In the second part, four case studies demonstrate how religious minorities became integrated in the two nation-states: Protestantism in France and Catholicism in the Netherlands between 1850 and 1960, and Islam in both countries in recent times.

The contributions raise important questions about the different dimensions of national political integration. How can we make sense of the sharply contrasting political rhetoric between the two countries: the Netherlands as the proverbial pluriformist political state and France as the vanguard of centralist laicism? Whereas at a pragmatic level of everyday political decision-making there is much more convergence between the two states. And how do the diverse historically developed political cultures shape different trajectories of integration of these religions?

Thijl Sunier is professor of ‘Islam in European Societies’ at the VU Institute for the Study of Religion, Culture and Society (VISOR), and Erik Sengers is assistant-professor of sociology (sociology of religion). Both are based at the faculty of Social Sciences at VU University (Amsterdam, the Netherlands).