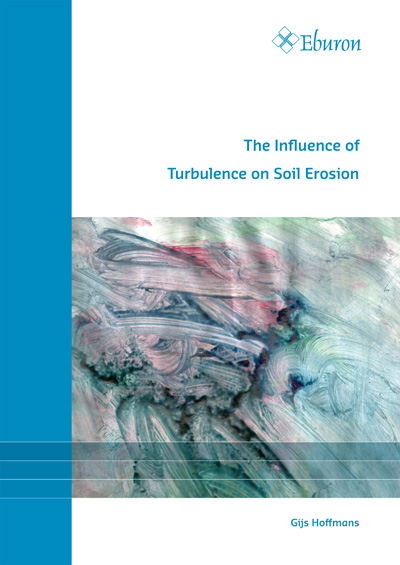 The Influence of Turbulence on Soil Erosion Gijs Hoffmans

This publication outlines the relevance of turbulence on the initiation of motion of soil and explains the interaction between the load and the resistance against erosion or the strength of the bed material. The stability of stones, sand, clay and grass is discussed by using Newton’s second law and a definition of the turbulence energy.

This publication outlines the relevance of turbulence on the initiation of motion of soil and explains the interaction between the load and the resistance against erosion or the strength of the bed material. The stability of stones, sand, clay and grass is discussed by using Newton’s second law and a definition of the turbulence energy.

Usually the equilibrium scour depth caused by jets and at piers/abutments is predicted by applying empirical relations. This publication discusses a scour approach which is based on two steps. First, a control volume that represents the scour hole is considered. Secondly, the relevant forces are determined. Newton’s second law is applied, that is, the sum of forces equals zero since the scour hole is in equilibrium. This approach is discussed for different types of jet scour and scouring downstream of sills and near bridge piers and abutments.

Dr. Gijs J.C.M. Hoffmans is an expert in the field of scour and erosion. He wrote the Scour Manual (1997) and published many scientific publications. He hopes that this publication stimulates discussion with others in order to improve our knowledge on the subject of friction forces in soil under both uniform and non-uniform flow conditions. Further analyses is also needed to make advances in optimizing the design process of hydraulic structures and this need will only become greater in the near future.