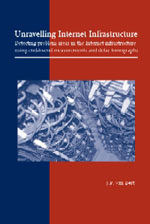 The Internet has become a critical infrastructure for modern society. Many people, companies and governments depend on the Internet for communication, information, and management of critical (business) systems. All of these activities depend on a robust Internet infrastructure. In sharp contrast with this dependence on Internet-based services is the lack of knowledge about how the underlying infrastructure functions as a whole.

The Internet has become a critical infrastructure for modern society. Many people, companies and governments depend on the Internet for communication, information, and management of critical (business) systems. All of these activities depend on a robust Internet infrastructure. In sharp contrast with this dependence on Internet-based services is the lack of knowledge about how the underlying infrastructure functions as a whole.

The Internet is simply too big, with hundreds of thousands of interconnected Internet Service Providers (ISPs) providing Internet access to their customers. Each of these ISPs administers its own piece of the Internet infrastructure. Asking each of the ISPs for information about their networks is an infeasible task, which is why a number of projects have started performing measurements on the Internet infrastructure, as if it were a natural phenomenon to be studied.

This thesis provides a set of methods to analyse the results of these Internet measurements, focussing on the detection of slow connections in the Internet infrastructure. It is shown how to determine network-internal delays using only end-to-end measurement data. The results are accurate within a factor of two, enough for the detection of very slow connections. These methods are relevant for ISPs in their decision making about with which other ISPs to connect their networks, and for governments in adequately assessing the need for and the possible effects of intervention in the, both economically and socially, very relevant Internet.

Jan-Pascal van Best was born in Utrecht (The Netherlands) on 22 March 1971. He graduated from the ‘Bonaventuracollege’ in Leiden in 1989. He then started his studies of physics and mathematics at Leiden University. In 1992 he discovered a security flaw in Novell’s NetWare networking software and he was invited to the corporate headquarters to discuss his findings. From 1996 to 1998 he worked for ‘Operator Groep Delft’, as an ICT specialist. He obtained his Master’s degree in physics in 1996 and his Master’s in Computer Science in 1998 (honours). From 1998 to 2004 he worked as a researcher at Delft University of Technology. The first year he performed research to ICT developments in Japan, for which he relocated to Kyoto for seven months. After this he started his PhD research, of which this thesis is the result. He also took part in the KWINT program of the Dutch Ministry of Economic Affairs, which is aimed at reducing the vulnerability of the Internet in The Netherlands. Currently, he works as an ICT specialist for the Dutch Ministry of the Interior and Kingdom Relations.