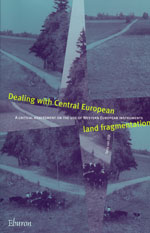 After 1990, the year that marked the collapse of socialism in the former Eastern Block, the land of the kolchozes and sovchozes was given back to the people for reasons of historical justice. As a consequence, however, land was subdivided into many small units. This land fragmentation impedes the emergence of a competitive new farming structure. In the light of joining the European Union, this problem has become a topical issue. The question is what policy instruments are suitable.

Many believe that land consolidation, an instrument that has achieved considerable improvements in the agricultural structure of Western European countries, is the key solution. This assumption is put through the test in this book by analysing the exact nature of land fragmentation in Central Europe. The exact nature is then confronted with the targets and prerequisites of three fragmentation-reducing instruments: land banking, land consolidation and parcel exchange. In addition, considerations of implementation are put forward. The main conclusion is that Western European instruments can be effective for reducing Central European land fragmentation, but in another way than is generally assumed.