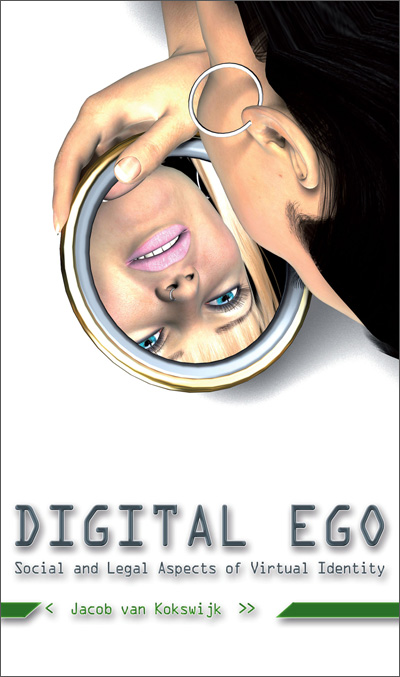 Non-human virtual identities have an increasing impact on our society. A virtual identity is not just an online identity of a person, but a new technical and social phenomenon. What if software agents, powered by artificial intelligence, start acting on your behalf in a digital marketplace? What are the legal consequences of decisions made by these autonomous virtual agents?

Digital Ego counters the common belief that a virtual identity is only a temporary and innocent phenomenon, which disappears when a computer is switched off. Influenced by markets, politics and culture, cyberspace is becoming a highly regulated world where, compared to our tangible world, behaviour will be much more tightly controlled. The author addresses a broad range of social and legal aspects of virtual identities, such as the position of virtual environments in real world legal systems, and the difference between virtual and real identities.

Jacob van Kokswijk is a communications expert. He has written several books and articles about digital interactive media, user controlled technologies, cross media development and human behaviour in cyberspace. He is Adjunct Professor HCI at KAIST Graduate School of Culture Technology (Korea Advanced Institute of Science and Technology). Jacob is also a Research Professor in digital media at the Dutch Twente University , and is currently researching the phenomenon of Virtual Identities at the Law School of the Faculty of Law, Arts and Social Sciences at the University of Strathclyde.

“As more and more social, business, political, cultural, and even legal activity takes place online, the issues of identity that Jacob van Kokswijk raises are going to move from the periphery to the centre of attention. As he so accurately points out, there are limits to the ways laws and regulations can be enforced in a global and disembodied Internet society.”
– Howard Rheingold, author of ‘The Virtual Community’ and ‘Smart Mobs’

“As artificial intelligence progresses, our virtual identities will come to include agents that act like us and for us even when we aren’t present. The avatar will have intelligence behind it. Thankfully Jacob van Kokswijk has produced this book, looking at the whole field in detail and pondering the legal consequences.”
– Ian Pierson, Futurologist BT Group Chief Technology Office

“The footnotes alone are worth the purchase price.”
– BotGirl