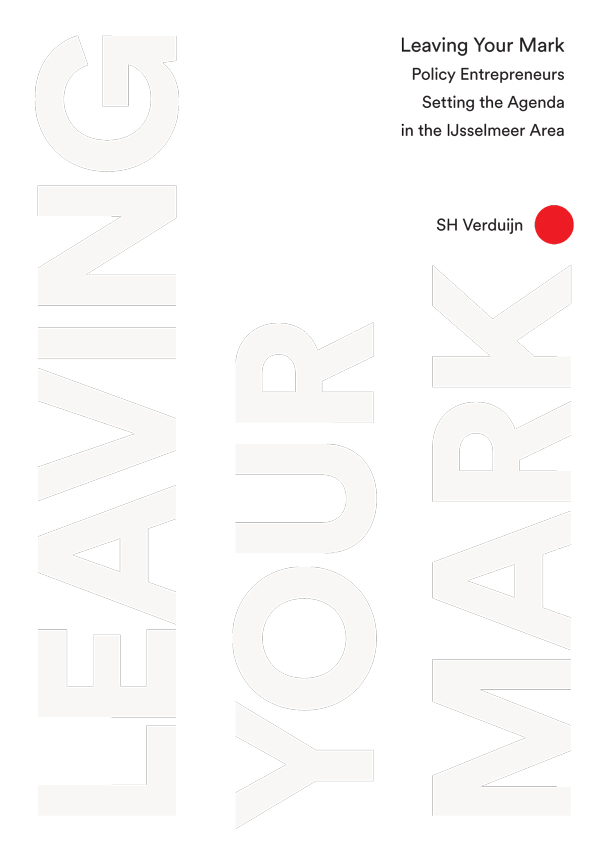 Simon Verduijn’s study describes a variety of individuals who try to leave their mark on the IJsselmeer area, the Netherlands. These individuals are regarded as policy entrepreneurs: people that strategically employ framing and networking strategies to advocate or oppose policy change by setting the public, policy and political agendas.

This book reports on Simon Verduijn’s (1985) PhD research on a variety of individuals who try to leave their mark on the IJsselmeer area, the Netherlands. These individuals are regarded as policy entrepreneurs: people that strategically employ framing and networking strategies to advocate or oppose policy change by setting the public, policy and political agendas. The book discusses relevant literature on policy entrepreneurship, framing and networking strategies, and agenda setting. The empirical research comprises an in-depth study of four cases, involving semi-structured interviews, document study and newspaper article analysis.

The first case selected concerns the Second Delta Committee, which set the agenda for water safety and climate adaptation in the Dutch Delta, and recommended a substantial increase in the water level of the IJsselmeer. The second case concentrates on policy entrepreneurs who pushed for a change in Dutch nature policy, advocating a focus on nature development over nature preservation. The third case considers policy entrepreneurs’ support or opposition to plans to realise outer-dike urbanisation and build an infrastructural connection—either a bridge or tunnel—through the Markermeer-IJmeer. The final case looks at policy entrepreneurs who advocated or opposed plans to create large clusters of wind turbines close to the historical village of Urk.

The study reveals how policy entrepreneurs employ various framing and networking strategies, exploit the use of visualisations, frame issues at stake differently, and frame themselves and others. Insights are also offered into how policy entrepreneurs cope with the enabling and constraining factors of context, with their various strategies, resulting in successes as well as failures.