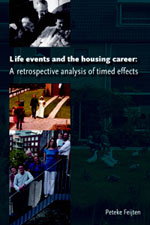 This book describes the impact of life events on the development of housing careers in the second half of the twentieth century in the Netherlands.

This book describes the impact of life events on the development of housing careers in the second half of the twentieth century in the Netherlands.

The theoretical framework is a life-course approach to residential mobility that defi nes the development of the housing career in terms of type, tenure and location. Using full retrospective life-history data, this research not only assesses the direct effects of such life events as marriage, childbearing and divorce on the housing career, but also the time ordering of events and the degree of permanency of the effects.

The outcomes show that, nowadays, the purchase of a single- family dwelling occurs more in anticipation of childbearing than as a response to growing family size. The results also show that many (but not all) life events may have a lasting effect over the life course. Early childhood experience turns out to play a more dominant part in the choice of a residential environment later in life than does early adult experience. The book will be of interest to demographers, geographers, and sociologists engaged in life-course analysis.

Peteke Feijten was born in Delft on March 22nd, 1975. She entered secondary education in 1987 in Nieuwegein, and she received her athenaeum diploma in 1993. After she completed a course in library and information skills in 1997, she entered Universiteit Utrecht to study sociology. She received her Master’s degree in sociology in 2000. In November 2000, she became a PhD research student in the Urban and Regional research centre Utrecht in the Faculty of Geosciences, Universiteit Utrecht. She was a member of the Netherlands Graduate School of Housing and Urban Research, where she followed various courses. She has also assisted in teaching in courses on multivariate analysis, population forecasting, and housing market models. From October 2001 to February 2002, Peteke visited the International Max Planck Research School for Demography in Rostock, Germany, where she followed courses and continued her own research. In 2005 she started working in the Netherlands Institute for Spatial Research in The Hague.