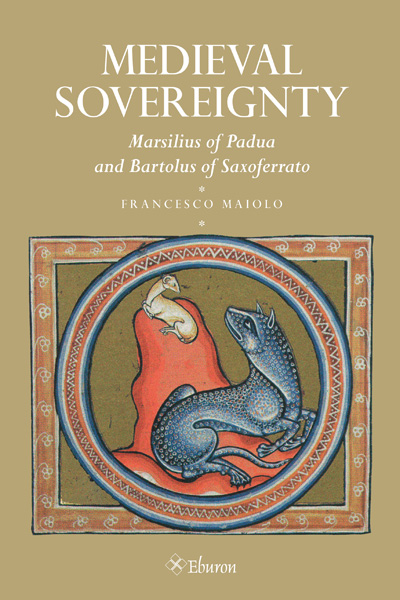 Medieval Sovereignty examines the idea of sovereignty in the Middle Ages and asks if it can be considered a fundamental element of medieval constitutional order. Maiolo analyzes the writings of Marsilius of Padua (1275/80-1342/43) and Bartolus of Saxoferrato (1314-57) and assesses their relative contributions as early proponents of sovereignty.

Medieval Sovereignty examines the idea of sovereignty in the Middle Ages and asks if it can be considered a fundamental element of medieval constitutional order. Francesco Maiolo analyzes the writings of Marsilius of Padua (1275/80-1342/43), and the writings of Bartolus of Saxoferrato (1314-57).

Marsilius’ famous Defensor pacis (1324) was one of the most extraordinary political and religious works which appeared during the fourteenth century. Bartolus developed many novel legal concepts, which became part of the civil law tradition. Both Marsilius and Bartolus are credited with having provided the legal justification for medieval popular government. Maiolo’s cogent reconsideration of this alleged primacy is an important contribution to current medieval studies.