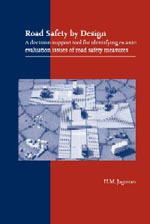 During the last decade of the 20th century the road safety policy in a number of Northern European countries has shifted from an approach in which the road users had to adjust to the traffic system towards the concept of an inherently safer road system. The basic idea of this concept is to prevent accidents from happening in the first place.

During the last decade of the 20th century the road safety policy in a number of Northern European countries has shifted from an approach in which the road users had to adjust to the traffic system towards the concept of an inherently safer road system. The basic idea of this concept is to prevent accidents from happening in the first place. For the limited number of accidents that remain, the severity level should be minimised.

A traffic system which is designed to be inherently safe, is further characterised by an integral systems approach in which the infrastructure, the vehicles and the regulations are tuned to the users of the system. In the coming thirty years the inherently safe concept will be implemented in various European road systems. In the same period various intelligent transport systems (ITS) will be introduced in these systems. In order to design an inherently safe system with ITS, the possible effects of implementing these systems should be studied using a systems approach, in which ITS has to be an element of the integrated traffic system.

In this thesis an integrated safety approach is developed to support design and decision making on traffic systems in a manner that meets the principles of an inherently safer traffic system. This approach involves two stages in which first the selection of road safety measures and definitions their intended operating processes are systemised and secondly the safety issues that may come along with the measures and their processes are explored.

Helena Maria Jagtman was born on Friday 13th of February 1976 in Leiderdorp, The Netherlands. She is generally known as Ellen. She visited schools in Leiden, before going to Delft University of Technology in September 1994, where she studied Systems Engineering, Policy Analysis and Management (Technische Bestuurskunde). Her main topic was transport policy and logistics organisation. She got her Master’s degree in April 1999 after studying for six months at Kyoto University in Japan. Her Master’s dealt with the possibilities of co-operation in the transport sector for urban freight transportation (city logistics). In August 1999 she started her PhD research at the faculty of Technology Policy and Management, were she was appointed at the group of Transport Policy & Logistic Organisation (until June 2001) and at the Safety Science Group. She joined the board of PROMOOD, organisation for PhD students at Delft University of Technology, from February 1999 until March 2002. In 2003 Ellen received the Young Scientist Award for the paper “Using HAZOP for assessing road safety measures and new technology” at the European Safety and Reliability Conference (ESREL). In June 2004 Ellen was appointed assistant professor at the Safety Science Group.