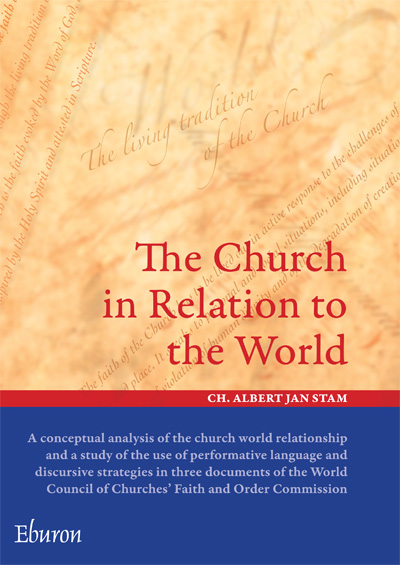 The Church in Relation to the WorldA conceptual analysis of the church world relationship and a study of the use of performative language and discursive strategies in three documents of the World Council of Churches’ Faith and Order Commission Ch. Albert Jan Stam

In this book the author examines the church to world relationship which emerges from studying a sampling of Faith and Order documents. He has chosen a blended qualitative research design, with some quantifying elements, consisting of the basics from narrative, rhetoric, and grounded theory approaches. He has performed this study by applying the strategy of multiple case study and by using ATLAS.ti software for the data management.

Faith and Order texts employ an ‘acting-like’ operation on two levels. On the first level, they operate by manipulating the readers. Conducting a performative analysis serves the description and explanation of the texts’ language while also utilising a discursive analysis has the purpose of indicating strategies which the texts employ to deeply embed their conceptual meanings. This brings the interpreter to the second level: the level of words and sentences that grow into meaningful concepts in their description of the church to world relationship. On this second level of interpretation, Faith and Order texts articulate the operations of God and the church in the world.

This book is an attempt to present three distinct configuration profiles by comparing the Lund report, the Stavanger document and the Nature and Mission document on the points of language, discourse and conceptual intent. The author shows the development of his research interest and the developing specificity of his research question in relation to the chosen paradigms, methods, approaches and techniques. He elaborates extensively on these elements in order to both account for his research management choices as well as to inform a, perhaps, less cognizant readership of a rather uncommon hermeneutical approach in the classical field of ecumenical research. His inquiry is supplementary to the prevailing studies about Faith and Order and is distinctive in its design, applied methods and techniques.

Ch.A.J. (Albert Jan) Stam was born on May 10, 1967 and is currently working as a minister in the Protestant Church in the Netherlands. He is married, father of three children and an active member of the Rotary and the YMCA.