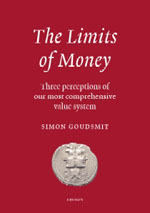 Money and the wheel are two of man’s great mobilizing discoveries. Without them modern life is fantasy. The Limits of Money describes important phases in the evolution of money, starting with the standardization of weights in the Near East 4000 years ago up to today’s electronic currencies.

Social change and political organization are essential elements in the evolution of money. The 20th century ushered in a new era of radical change. The EU and the Euro raise many questions about the organization of the super state and the civic roles of its multicultured population. Part three focuses on the organizational limits of money for complex political combinations.

Simon Goudsmit (1927) is the son of a Dutch father and English mother with Jewish backgrounds. After the Nazi invasion of the Netherlands in 1940, the family fled and found refuge in the United States. He continued his education at Swarthmore College and Harvard (MBA 1950) before returning to the Netherlands with his American wife. Besides a long and varied career in business he taught management and organization.